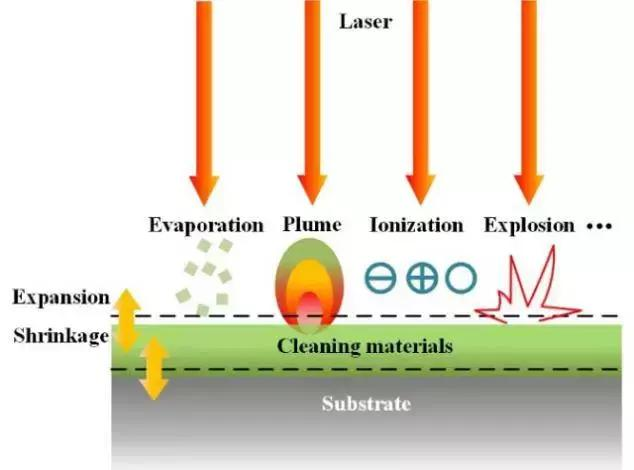 The mechanism of liquid assisted laser cleaning to remove materials mainly includes liquid vibration, boiling and explosion, as shown in Figure 2.It refers to pre-covering the surface of the cleaning material with liquid (water, alcohol or other liquids), and then irradiating it with a laser. The liquid film absorbs laser energy and causes a powerful explosion of the liquid medium. The explosively boiling liquid moves at high speed and transfers energy to the surface cleaning material. The explosive force is sufficient to remove surface dirt to achieve cleaning purposes. 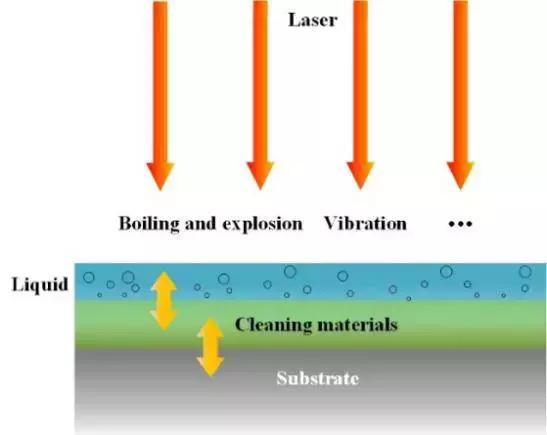 Among the above three methods, the laser ablation cleaning method has simple operating conditions and is the most widely used. All kinds of coatings, paints, particles or dirt can be removed as long as the appropriate laser type is selected and the optimized process parameters are used. The laser cleaning machine produced by Jinan Senfeng Laser Technology Co., Ltd. adopts this cleaning method, which makes the cleaning efficiency high and the cleaning effect is very good.

When using the liquid film-assisted laser cleaning method, you need to consider selecting the appropriate laser wavelength. The higher the absorption rate of the liquid film to the laser, the more obvious the advantage. The liquid film assisted laser cleaning method can make up for the problem of insufficient impact pressure in the laser ablation cleaning process, and is often used to remove some cleaning objects that are more difficult to remove. However, this method has two disadvantages: one is that the process is troublesome and the process is difficult to control; the other is that the chemical composition of the substrate surface is easy to change after cleaning, and new substances are generated.

The laser shock wave cleaning method is mainly used to remove particles (sub-micron or nano-level). This method has very strict process requirements. It is necessary to ensure that the laser parameters can ionize the air, but also to maintain a proper distance between the laser and the substrate to ensure that the impact force acting on the particles is large enough.